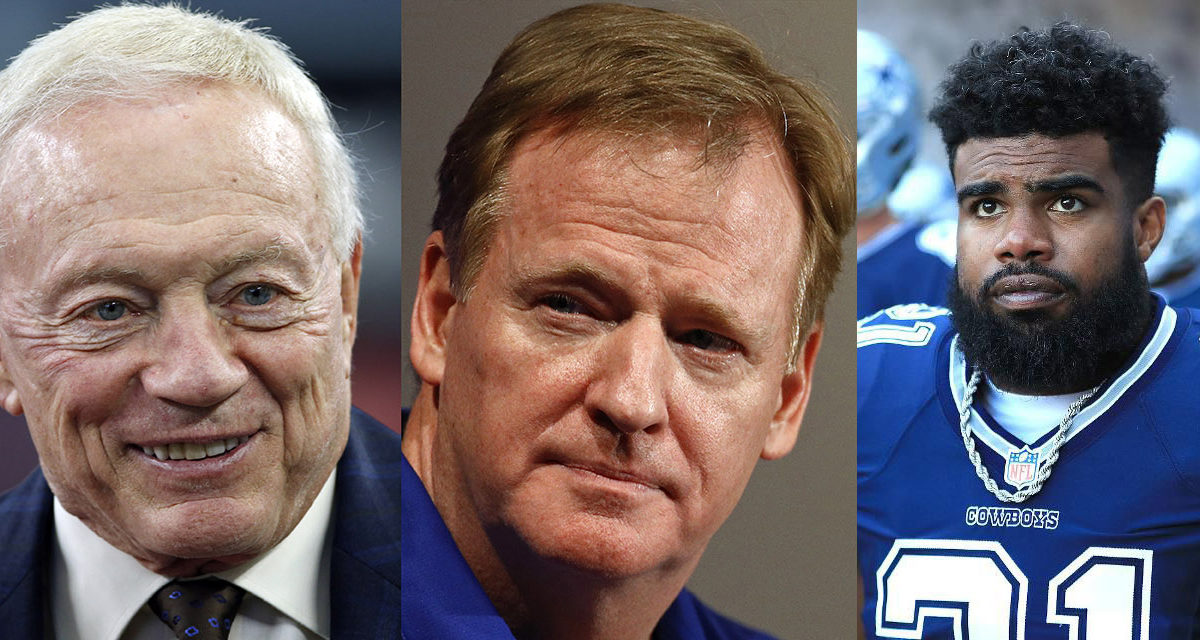 Today the NFL and Roger Goodell have announced that they are preparing to demand millions of dollars from Jerry Jones for the course of events over the past year.

Jerry Jones wants his Dallas Cowboys to win games.  That’s no secret…and it’s not a sin.  Every NFL team owner wants their team to win games and win the Superbowl.  Jerry has simply had the finances and business acumen to make it happen more often than some, though that hasn’t happened since the mid 90’s.  The expectation is still there in Dallas every year.  Being labeled America’s team comes with that expectation.

Now to the NFL.  Under the helm of Roger Goodell the NFL’s treatment of player offenses has been an up and down joke.

Which of these is not like the others?  Roger Goodell clearly felt the pressure of his failures and needed to make a statement.  The problem is, he used the wrong case to do so…and once he did, instead of seeing reason he doubled down.

Once that happened, Jerry Jones went on the offensive and started looking into Roger Goodell’s upcoming contract extension.  Jones and 16 other NFL owners insisted that the NFL delay the decision based on their unhappiness with how he handled the issues above and other recent issues.  Jerry Jones went so far as to threaten legal action, to which the NFL owners threatened to remove Jones as owner of the Cowboys.  He eventually backed down and things seemingly returned to normal.

However, today months later Roger Goodell and the NFL are preparing to insist that Jerry Jones pay millions of dollars in fines and legal fees for everything that occurred.  Neither the NFL nor the Cowboys have so far commented on the situation.

This is beyond ridiculous.  Jerry Jones is in the spotlight, a spotlight he partially creates for himself to boost the attention to his team, and he has led the battle against the powers that be so they are coming after him, leaving the other owners who agreed with him behind.  The NFL owners and Roger Goodell are being incredibly petty and it’s hard to imagine how they can expect Jones to agree to these terms.  Jerry was backing his player, a player never charged with any crime yet singled out by the NFL due to its own inadequacies in how it penalizes players.  They’ve punished Elliott, so now they want to punish Jones and make him the bad guy.  Good luck with that.  Doing this only continues to hurt the image of the NFL.